Some important designs of compressors include: 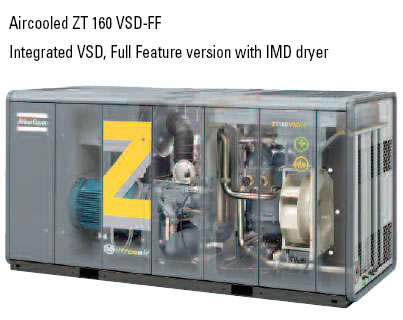 are declining as they are replaced by less costly rotary screw compressors. Discharge pressures can range from low pressure to very high pressure (>5000 psi or 35 MPa).

• Rotary screw compressors—uses two meshed rotating positive-displacement helical screws to force the gas into a smaller space. These are usually for continuous, commercial and industrial applications and are both stationary and portable. Their application can be from 5 hp (3.7 kW) to over 500 hp (375 kW) and from low pressure to very high pressure (>1200 psi or 8.3 MPa). They are commonly seen with roadside repair crews powering air tools. This type is also used for many automobile engine superchargers because it is easily matched to the induction capacity of a piston engine.

• Scroll compressor—similar to a rotary screw device, this one includes two interleaved spiral-shaped scrolls to compress a gas. Its output is more pulsed than the latter and this factor has caused its declining industrial use. Can be found in automotive use as a supercharger.

Air compressors sold to and used by the general public are often attached on top of a tank for holding the pressurized air. Oil-lubricated and oil-free compressors are available. 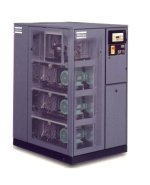 Gas compressors are used in various applications where either higher pressures or lower volumes of gas are needed:

• in pressurized aircraft to provide a breathable atmosphere of higher than ambient pressure
• in jet engines to provide the great mass of operating fluid and, at high altitudes, a high enough concentration of oxygen for combustion of the air and fuel mixture. The power to turn the compressor comes from the jet's own turbines.
• in medicine and manufacturing to store purified or manufactured gases in a small volume
• as a medium for transferring energy, such as to power pneumatic equipment
• in refrigeration and air conditioner equipment to move heat from one place to another in refrigerant cycles: see heat pump.
• in pipeline transport of domestic gas to move the gas from the production site to the consumer
• in SCUBA diving, hyper baric oxygen therapy and other life support devices to store breathing gas in a small volume such as in diving cylinders
• in submarines to store gas for later use as buoyancy
• in turbochargers and superchargers to increase the performance of internal combustion engines by concentrating oxygen
• at vehicle service stations for providing compressed air for filling pneumatic tires

Charles' law says "when a gas is compressed temperature is raised".

There are three possible relationships between temperature and pressure in a gas undergoing compression:

• isothermal - gas at final stage of compression is same temperature as at beginning of compression. In this cycle, heat is removed at the same rate as it is added by the work of compression. This is impractical for a working machine.
• adiabatic - This assumes that there is no heat transfer, into or out of the process, and that all work added is expended in creating a pressure rise. Theoretical temperature rise is T2 = T1·Rc((K-1)/K)), with T1 and T2 in degrees Rankin or Kelvin, and K = ratio of specific heats (approximately 1.4 for air). The rise in air and temperature ratio means compression does not follow a simple pressure to volume ratio. This is less efficient, but quick.
• Polytropic - This assumes that heat may enter or leave the process, and that work added can appear as both increased pressure (useful work) and increased temperature above adiabatic (losses due to cycle efficiency). Cycle efficiency is then the ratio of temperature rise at theoretic 100 percent (adiabatic) vs. actual (polytropic).

Since compression generates heat, the compressed air is to be cooled between stages making the compression less adiabatic and more isothermal. The inter-stage coolers cause condensation meaning water separators with drain valves are present. The compressor flywheel may drive a cooling fan.

For instance in a typical diving compressor, the air is compressed in three stages. If each stage has a compression ratio of 7 to 1, the compressor can output 343 times atmospheric pressure (7 x 7 x 7 = 343).

There are many options for the "prime mover" or motor which powers the compressor:

• gas turbines power the axial and centrifugal flow compressors that are part of jet engines
• steam turbines or water turbines are possible for large compressors
• electric motors are cheap and quiet for static compressors. Small motors suitable for domestic electrical supplies use single phase alternating current. Larger motors can only be used where an industrial electrical three phase alternating current supply is available.
• diesel engines or petrol engines are suitable for portable compressors and support compressors used as superchargers from their own crankshaft power. They use exhaust gas energy to power turbochargers